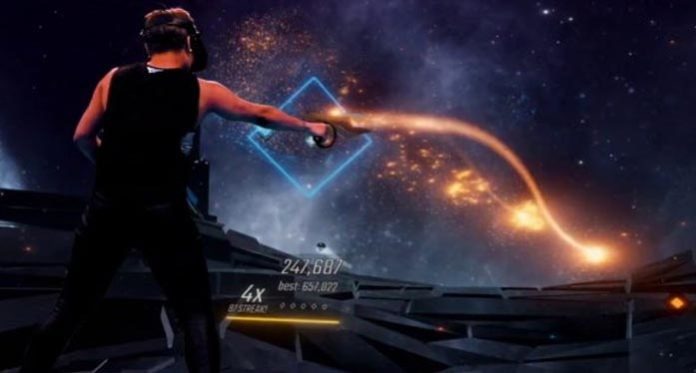 Virtual reality rhythm games are especially popular with VR fans. Discover our selection of the best titles of its kind.

The different types of video games are not all adapted to virtual reality. While FPS and RPG VR for example are often captivating, platform or strategy games are often disappointing.

If there is a style of play that is even more interesting in VR than on console or PC, it is the game of rhythm. These games not only test your sense of tempo, but also often feast the senses and do some sports while having fun.

Whether its dance games or music, many virtual reality rhythm games are excellent. Discover our selection of the best.

Should we still present Beat Saber? A true leader in VR rhythm games, this independently developed title has been phenomenally successful to the point that it is the first virtual reality game to have reached one million downloads.

This is an original concept game, halfway between Guitar Hero and Star Wars. Equipped with two lightsabers, the player must slice cubes that scroll to the rhythm of the soundtrack.

Soon, the player is almost dancing to slice the cubes at the right time while avoiding obstacles. Visual and sound effects are jubilant.

The Beat Saber game can make you lose weight while having fun and developing your sense of rhythm. From simple indie game, the title has become a reference so much that a partnership with Imagine Dragons has been tied.

Audica, the VR rhythm game from the creator of Guitar Hero

Audica is not just any VR rhythm game, since it is developed by Harmonix: the creator of the famous Guitar Hero and Rock Band franchises.

Halfway between shooting game and rhythm game, the game offers to use different weapons to shoot at targets to the rhythm of the music. This title could be described as a Beat Saber in which sabers are replaced by firearms.

The more accurate and synchronized the player is, the more points he scores. The higher his score, the higher he gets in the world rankings. Competition fans will be thrilled.

The soundtrack is composed by the most popular electronic musicians in the world , and this is a real benefit that only a large studio like Harmonix can enjoy.

Electronauts is developed by Survios, to whom we owe some of the best VR games such as Raw Data, Creed or Sprint Vector.

It’s not a rhythm game itself, but a real tool for creating your own music, remixing it, and playing it on the stage of a festival in front of a crowd of spectators virtual.

You can also join your friends to “jam” together and fire the turntables. If you have always wanted to become a DJ, now is the time to realize your dream.

Introduced in 2015, Holodance is one of the first virtual reality paced games. However, since its launch, this title has evolved a lot.

Initially, Story mode only allowed to dance on some songs created especially for the game. Now, it is possible to play more than 12,000 songs in the Free Mode, with 20 different environments.

The goal is to dance while catching orbs with his head or hands. If you own Vive Trackers, you can even use your feet!

Originally, Audioshield is a rhythm game available on PC. It has the great advantage of allowing the player to use any song from his collection as a soundtrack.

The goal of the game is to use shields to protect against notes that parade in rhythm. The adaptation in virtual reality is excellent, and offers a sensation of immersion of an unprecedented scale.