Google said it, Google did it! At its last annual conference, the Mountain View Company finally unveiled its new range of affordable smartphones, including the Google Pixel 3a XL. The promise?

A smaller price with photo performance worthy of the most upscale models. At less than $500, there is no doubt that it is one of the best in its class, but what is it worth against a Xiaomi Mi 9 sold at the same price? Using our detailed comparison, find out which of the two is the best smartphone.

Until now, Google has been content to make smartphones with high-end features, including choosing each time the last chip of Qualcomm for its flagship: Snapdragon 821 for the Pixel, 835 for the Pixel 2 and the 845 for the Pixel 3.

Today, the American giant changes its track record and decides to decline its latest flagship in a much more affordable version. Sold at less than $500, you will not have the latest premium chip of the moment, but you can have a Pixel 3a XL gifted in photo and in the idea it’s great.

However, we must not forget that competition is fierce on this tariff segment, if only when we think of Xiaomi, the champion of quality/price ratio.

A question then arises: what is the best smartphone between a Google Pixel 3a XL and a Xiaomi Mi 9? Design, performance, photo, autonomy … Discover our detailed comparison between the two smartphones!

Being categorized as a midrange smartphone, it is not at the level of power that the Google Pixel 3a XL will shine the most. It modestly integrates a Snapdragon 670 coupled to 4 GB of RAM to ensure a smooth user experience, and it stops there. This smartphone is anyway not intended to play the greediest games of the Play Store.

What to face the Snapdragon 855, the latest high-end chip from the manufacturer Qualcomm. The Xiaomi Mi 9 is also the first French representative. The power gap between the two smartphones is obviously huge. Accompanied by 6 GB of RAM, this configuration simply provides the best performance in the market by far. It offers its users an exemplary fluidity on simple tasks, while showing its full potential on the most complex tasks.

The numbers speak for themselves … Basically, if you want to play Fortnite Mobile in high graphics mode at 60 fps or epic mode at 30 fps, the Xiaomi Mi 9 is the smartphone for you.

Conclusion: Which is the best smartphone?

In the end of this versus, we notice very quickly that the fight was rather tight. As a high-end smartphone from the Chinese manufacturer, the Xiaomi Mi 9 tries to bring its vision of excellence with a flagship resolutely premium, thanks to its neat and elegant design, its many features or its high characteristics. It is currently the best value for money in the market and we can only advise you.

However, everything depends on what you are really looking for. Indeed, if you do not play video games or if you are not a fan of the wireless charge, this choice quickly becomes less relevant. On the other hand, if you wish to have a simple smartphone to use, fluid, autonomy, and on the market, incredibly talented in the photo, the Google Pixel 3a XL then becomes the new reference to less than $500. 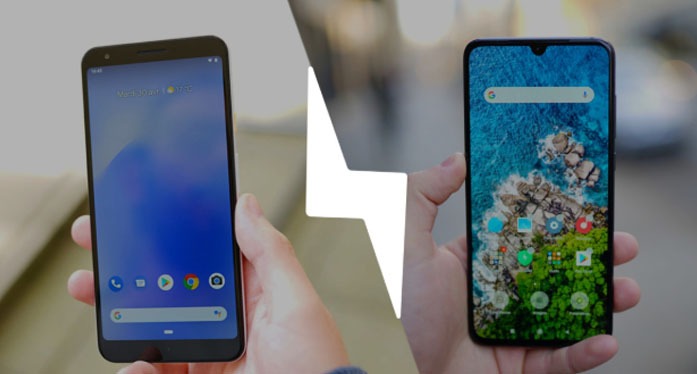