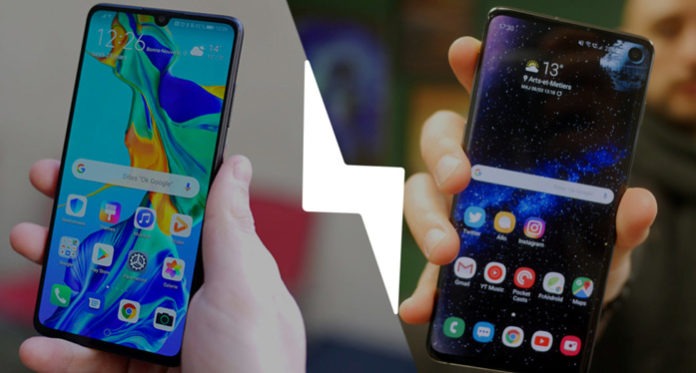 A few days after Samsung unveiled its Galaxy S10, the direct competitor also unveiled its new flagship: the Huawei P30. The two manufacturers have the annoying habit of presenting their flagship of the year very closely, and this does not facilitate the choice for the consumer. If there is a small difference in price in favor of Huawei, the two smartphones yet offer a rather similar data sheet: premium design, high performance, triple photo sensor, etc. What solution must we crack in this early spring? Using our detailed comparison, find out which one is the best smartphone.

Acclaimed by critics, the Samsung Galaxy S10 has managed to seduce the public with solid arguments, thanks to its screen of incredible quality. However, it is not the only new entrant in the market to attract curiosity on the premium segment in early 2019.

The Huawei P30 arrives with just as many qualities as its competitor and this can make it difficult for consumers tie. If we do not doubt the expertise of the Korean manufacturer with its Super AMOLED technology, what about the performance, the photo or the autonomy against the P30? Let’s see all this in detail, but especially in the calm.

A question then arises: what is the best smartphone between a Huawei P30 and a Samsung Galaxy S10? Design, performance, photo, autonomy. Discover our detailed comparison between the two smartphones!

Design: the bubble you will recognize, the notch you will confuse 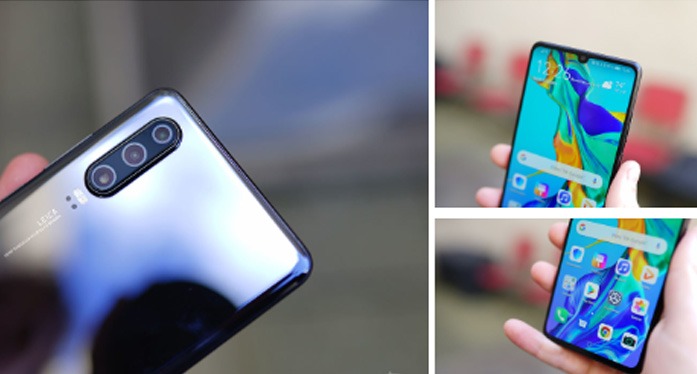 With the Huawei P30, the Chinese manufacturer takes again broadly the well-known look of smartphones of the batch of 2018. Of this, one finds without surprise a big screen with a notch, as well as fine borders around. Nevertheless, this is far from being a bad point, especially when the finishes are exemplary. If it does not have as much premium side as the Pro version with its curved edges, it nevertheless has the advantage of being much more comfortable in hand thanks to a better distribution of weight. The format of the phone is also very well suited to give the maximum space to the beautiful OLED tile, including a very thin chin (4.5 mm against 5 mm for the S10) and a discreet notch shaped drop water (only 8 mm thick). On the back of the phone.

Unlike its Chinese competitor, Samsung has made great efforts for the aesthetics of its new flagship. With its curved screen and small bubble at the top right of the device, the Samsung Galaxy S10 has simply a unique design. Its thin (but uneven) edges allow its slab to occupy 94% of the front surface and it must be said that it is a feast for the eyes. It particularly seduces with its rather compact format (149.9 x 70.4 x 7.8 mm) – moreover almost similar to the measurements of the P30 with 149.1 x 71.36 x 7.57 mm – which also holds well in hand, and where the thumb will not have great difficulty to reach elements at the top of the screen. On the back of the phone, there is a beautiful glass pane (compatible wireless charging) and the triple sensor camera positioned here horizontally.

If the fingerprint sensor can no longer be positioned incorrectly (now that it is under the screen), the Bixby button is unfortunately still there to annoy us, just below the volume button. The good point: it can finally be reconfigured. 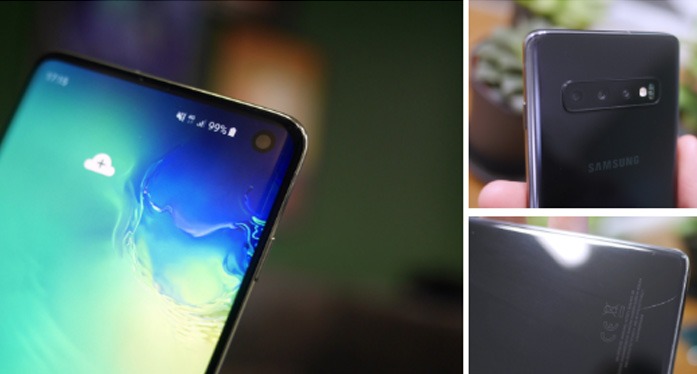 In an almost identical format, both smartphones hold pleasantly in hand. However, Huawei has just perfected a design (loved, or not) when Samsung has decided to innovate. To date, the Korean manufacturer offers a look for the less original that is easy to distinguish at first glance, unlike the Chinese manufacturer who is a little too much in the crowd.

Screen: Samsung, it’s stronger than you! 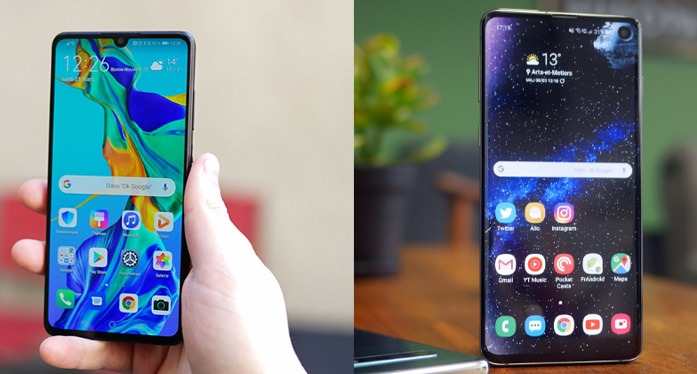 If the P20 Pro was the only one to benefit from an OLED panel last year (the P20 with an LCD IPS display), we can only appreciate the effort of Huawei to propose from now on the same technology on its two new iterations this year. As a result, the P30 then embeds a 6.1-inch OLED screen with a full HD + definition of 2340 x 1080 pixels. Apart from its tendency to pull the blue color – which is easily adjusted from the phone settings – little can be blamed on this slab. Contrasted and luminous, it will fully satisfy the eyes of its user.

For its part, Samsung obviously equips its flagship with a Super AMOLED panel, the same size as the P30 (6.1 inches), but with a maximum definition HD Quad + 3040 x 1440 pixels. Not surprisingly, the screen is very good … difficult to criticize Samsung on this subject (the hole in the screen does not interfere with the use at all). The colors are vivid, the contrasts are excellent and its maximum brightness is perfect to consult the smartphone in any situation, even in direct sunlight. In short, the Korean manufacturer proves once again that it is the best in this area.

Even though the screen of the Huawei P30 is very good, it is not enough to beat the champion on his own field. The slab of the Galaxy S10 is simply excellent, with a level of detail more than appreciable thanks to its definition in Quad HD +.

Performance: both back from the S855

Already used on the Mate 20 and Mate 20 Pro at the end of 2018, the Kirin 980 still makes a good impression on the Huawei P30. The performances are even higher than on the previous iterations to offer a perfect fluidity in everyday life. In 3D games too, he does particularly well with HD graphics and a high frame rate, even if he does not yet have the 60 fps mode on Fortnite Mobile. Nevertheless, there is no doubt that this mode will soon be activated by Epic Games, as was the case with the Honor View 20, equipped with the same chip.

Samsung has also equipped its Galaxy S10 with its house chip: the Exynos 9820. Here too, the performance is at the rendezvous for an exemplary fluidity and an always pleasant user experience. It must be said that the performance of these two SoCs are almost identical, whether the performance mode of the P30 is activated, or not. Therefore, the finding is similar in game with high graphics, without slowdowns, with a small mention for the compatibility of 60 fps mode on Fortnite Mobile. However, it should be noted that it does not manage as well the heater as its competitor, and it is a pity.

If both smartphones offer very high performance that will be sufficient for many years, we can only point the finger already large power gap with the new SoC Qualcomm Snapdragon 855, which team including the Mi 9 with 300/400 euros of less on the bill.

Photo: VERSATILITY is a keyword in 2019! 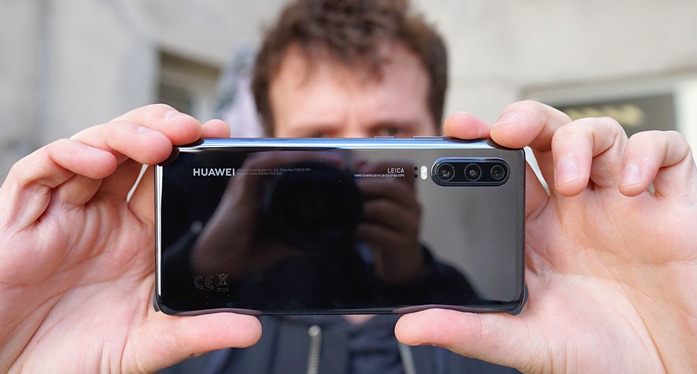 If the P20 Pro has upset the world of photo on smartphone with its triple sensor, the P30 does not create a revolution in itself, but manages to perfect a winning formula already. With its module 40 + 16 + 8 megapixels, it brings a great versatility in its use, and even if it does not integrate the sensor ToF (Time of Flight) as is the case on the Pro version, its portrait mode remains extremely convincing. In automatic mode, with or without AI, the result is of exemplary quality – all that is expected of a high-end smartphone – with colors close to reality and dynamic ranges well transcribed. Where the P30 especially surprises, it is in low light. It happens to capture more light than the Galaxy S10 to get better shots (with or without night mode).

With the Galaxy S10, Samsung has also put in the fashion of the triple sensor. This module includes a 12-megapixel main camera, a 12-megapixel x2 zoom, and a 16-megapixel ultra wide-angle camera. Very versatile, this configuration can also be adapted to all situations, thanks to its excellent main sensor in all conditions (indoor, outdoor, low light, backlit, on a moving target, etc.) . The only downside comes from the ultra-wide angle sensor during night shots, although it is very convenient to use despite slight distortions. 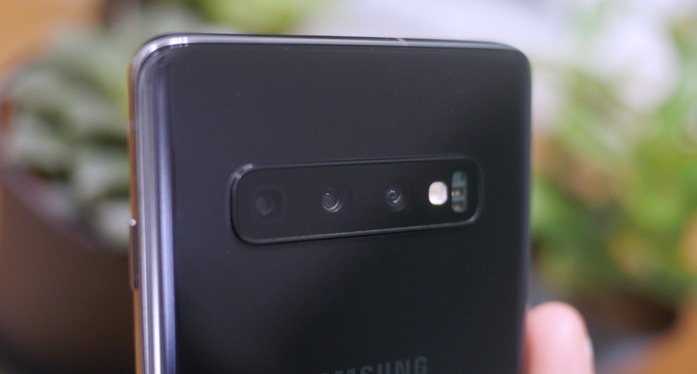 The versatility shown by the Galaxy S10 and Huawei P30 is impressive. By adapting easily to all situations, they make it easy to use the camera. The quality of the shots is always at the rendezvous, but one of them wins our preference even if they are both excellent. With the P30, the colors are often more accurate than on the Galaxy S10, with a transcript of reality that is a more natural chouia, especially in low light with a much more complete manual mode.

Battery: two days of use = the union minimum 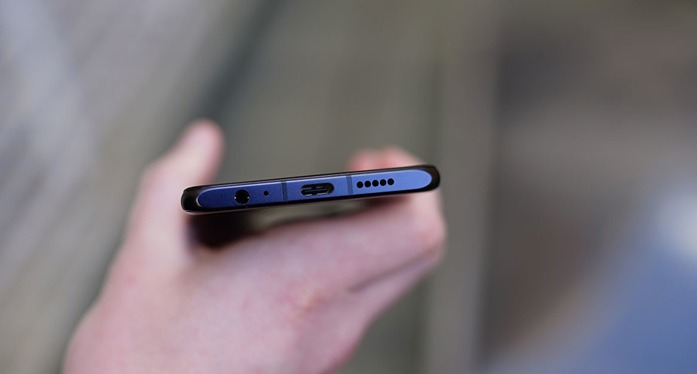 Huawei rarely disappoints at the level of autonomy and it is not the P30 that will derogate from the rule. Despite its battery of 3,650 mAh, it is at least as enduring as its big brother (with its battery of 4,200 mAh). It can easily hold for two consecutive days before falling flat. During our test, he managed to hold for 48 hours before falling below 8% battery, a good result that is even better than the Honor View 20, already excellent. It is also compatible with the SuperCharge 22.5 W fast charge to go from 7% to 100% in just 1 hour and 14 minutes.

In opposition, autonomy has always been a problem at Samsung and it is not the Galaxy S10 that will change the situation. Its 3400 mAh allow it to hold the day, but that’s all, or less if you abused Fortnite Mobile at lunch break. This endurance problem is not found with the S10 Plus iteration, but we would have appreciated that a smartphone of this size does not require constantly to walk with an external battery. Or, we just have to moderate knowing that we are entitled to about 4:30 screen use. The S10 is also compatible with fast charging, wireless charging and wireless reverse, but the latter is not really relevant given the small autonomy of the Korean flagship.

On our personalized Viser test, the Huawei P30 managed to hold 11 hours and 56 minutes while the Galaxy S10 only held 9 hours and 52 minutes. A gap that makes a difference, unless you prefer to take advantage of wireless charging with Samsung.

Whether it’s the Huawei P30 or the Samsung Galaxy S10, both smartphones are worthy of inclusion in the premium segment with a very similar technical sheet, especially in terms of performance and photography. Nevertheless, the Korean manufacturer’s solution is slightly more qualitative in some respects. Its design is extremely neat, its screen is simply the best of the market, the complete overhaul of the interface (now called One UI) is a real treat for everyday use, and we can obviously count on all the “next With a more powerful ultra-wide angle mode, or wireless compatibility that will surely be missed by so

me with the P30. However, it is far from free from any defects, especially with its low autonomy. So yes, the P30 does not have the best slab in the world, but with 110 euros less on the bill, we have a much more enduring smartphone, while enjoying an equivalent experience in all areas. It remains to be seen if you can support the old-fashioned EMUI interface on a daily basis. 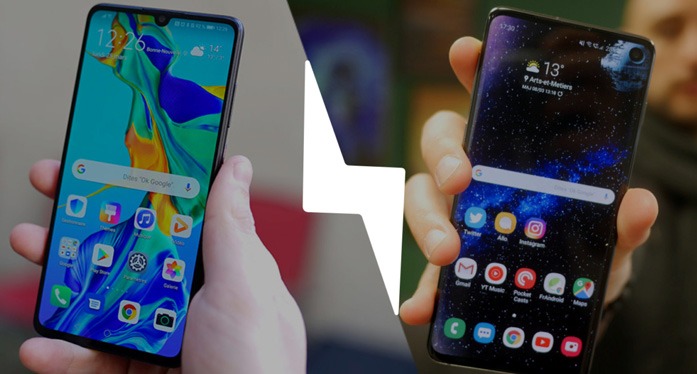