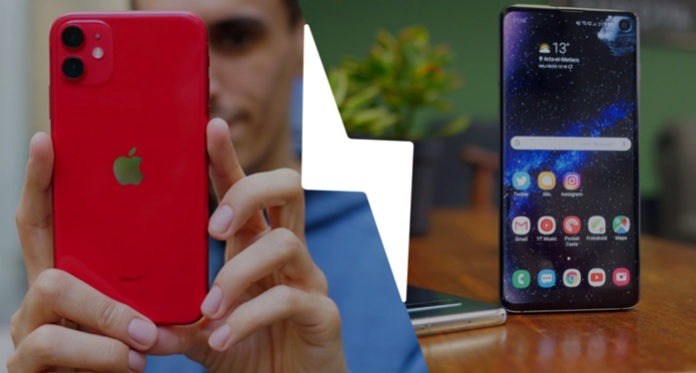 The Samsung Galaxy S10 and Apple’s iPhone 11 are both high-end smartphones that live in the shadow of their Plus / Pro version. But for a “reasonable” price, which of the two is the best smartphone? Here is our comparison!

Many years after the launch of the first iPhone and the first Galaxy S, Apple and Samsung continue to engage in a real war on the high-end smartphone segment. Both manufacturers have exceeded the $1000 for their most expensive smartphone, but still offer a more affordable version: the iPhone 11 on one side and the Galaxy S10 on the other. Two excellent smartphones that could rock the heart of a buyer.

A question then arises: what is the best smartphone between an iPhone 11 and a Samsung Galaxy S10? Design, performance, photo, autonomy … Discover our detailed comparison between the two smartphones.


Datasheets of both Smartphones

Between the iPhone 11 and the Samsung Galaxy S10, there are two totally different philosophies that oppose each other. On the one hand, Apple is staying on its positions with a notch smartphone with fairly consistent borders, and on the other, Samsung enters the modern ground with its screen smartphone pierced and curved on the edges.

In one case as in the other, we remain on a glass design at the back with a metal frame for the periphery. Nevertheless, where Apple loudly proclaims the strongest glass ever seen on a smartphone that of Samsung is rather sensitive to scratches, which gives a serious advantage to the American.

Overall, the finishes are exemplary in both cases, but Samsung wins a point for those who regularly use their smartphone placed on a table, since its horizontally oriented photo module makes the device less unstable than that of the iPhone 11, as a square in the upper left corner. Both, however, remain true dust collectors.

It’s really at the screen level that the difference will be played out. The iPhone 11 is clearly reminiscent of the 2017 iPhone X with its big notch and its big borders, while the Samsung Galaxy S10 displays a beautiful slab that seems to push the limits. We find ourselves at the Korean with a screen of the same diagonal, but without cut – or almost – in a more contained template.

Another advantage: the technology used. On its iPhone 11, Apple sticks to the LCD to reduce costs while Samsung does not hesitate to equip his small model of its best OLED panels. Admittedly, the LCD of the iPhone 11 is sublime, very bright and well calibrated, but it is difficult to compete with the contrasts of the OLED, especially that it does not fish so far on its colorimetry.

Despite its rear shell a bit fragile, it is clearly the Samsung Galaxy S10 that takes the lead in terms of screen and design.

As for the software part, this is essentially a question of taste and it is difficult to really choose objectively between iOS and Android. Nevertheless, there are some points that will tip the balance on one side or the other.

The One UI interface of Samsung is one of the best that can be found today on Android, especially because of its ease of use and its many customization options. Everything stays within reach of thumb for easy one-handed use, gesture navigation stays true to Android’s first steps, everything can be modified to fit the user’s preferences and we can even create automatic “routines” to adapt the interface to his needs according to the time of day or the situation.

Moreover, despite the time of deployment of major updates, Samsung remains one of the best students about security updates and the Galaxy S10 will of course be one of the first smartphones manufacturer to enjoy Android 10.

The iPhone 11, however, has for him an irreproachable follow-up, and this on many years, and especially the fluidity of the animations of iOS. In use, it really feels like you have a smartphone much faster thanks to all these small movements that follow each finger pulse on the screen.

Unfortunately, it is more limited by its closed OS status. When an application is blocked by Apple, it is impossible to find it easily elsewhere, the apple brand tends to push a little too much its own services and competing options are often far from optimized. 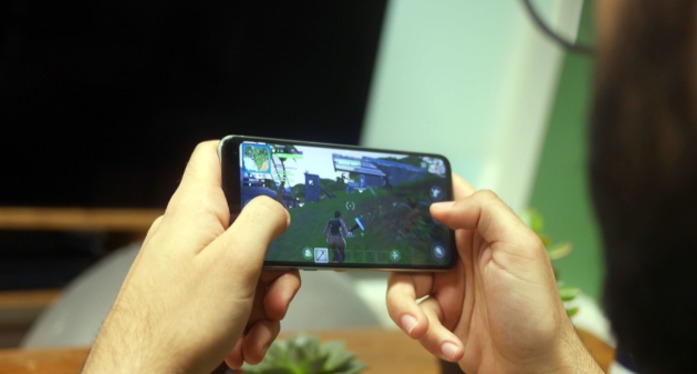 When it comes to raw performance, Apple often has a head start. The iPhone 11 is equipped with only 4 GB of RAM, but its SoC A13 Bionic and its software optimizations make it a real rocket both in everyday life and on the greediest uses.

At no time does the iPhone 11 show signs of weakness. All navigation is smooth, applications open quickly, the sequence of one to another is no problem and the most resource-demanding games like Fortnite, PUBG or CoD Mobile run smoothly on it.

On the Galaxy S10, it’s more or less the same. If its SoC develops a little less power, its extra RAM allows it to be fluid every day, if we take the trouble to go in the developer options to reduce the duration of animations that give a false sense of slowness to certain transitions.

The Galaxy S10, however, struggles on prolonged use. Its SoC tends to heat and performance is necessarily affected.

Versatility and sharpness in front of color accuracy

Whether Samsung or Apple, we are here in the presence of two cadors of the photo on smartphone and whatever the criticism that we will do here, always keep in mind that these two smartphones are among the best in the field.

On the main optics, the two smartphones are doing very well, with excellent sharpness on the center of the image and at reasonable distances, good control of contrast and light, but the HDR mode of the Galaxy S10 nevertheless surpasses that of the iPhone 11 and better manages the very strong dynamics. It also better manages distant elements with a sharper focus, where the Apple smartphone is amazing close, but far less dazzling by far.

In the portrait mode, the two phones tend to cut a bit abruptly subjects, but the bokeh of the iPhone is more pronounced and prettier … But that is clearly not much of a game.

Finally, in video, the image is excellent with the Galaxy S10 and the iPhone 11, but it captures a better sound.

Suffice to say that it is very difficult to choose between the two, but we have a slight preference for the Galaxy S10, more versatile and whose colorimetry can more easily be caught on a software that the lack of clarity at a distance from the iPhone 11.

For years, the iPhone has been mocked for its mediocre autonomy. In 2019, Apple has clearly raised the bar on its entire range. If it’s less visible on the iPhone 11 than the iPhone 11 Pro, the LCD model is doing well with an autonomy that can largely hold on the full day or more according to the uses.

In the opposite corner, the Korean challenger is on the mat before even start the last third of a day a little too hectic. If you want to play, you may need to fully charge your smartphone once or twice a day.

Charging elsewhere is fast on both devices … but the chargers delivered in the box are not adapted to the maximum amperage supported by these smartphones. With 5 W on the iPhone and 15 W on the Galaxy S10, it is far below what some competitors offer, even at lower prices. If it’s still bearable at Samsung with a full charge in 1:20, at Apple it takes more than 3 hours to restore its full potential to the battery. In other words, you have not finished leaving the smartphone plugged in at night.

iPhone 11 or Galaxy S10: which is the best smartphone?

It’s hard to say which is the best smartphone between an iPhone 11 and a Galaxy S10, both are very qualitative and full of quality. Nevertheless, if the iPhone 11 suffers only minor defects and is never left totally behind – except perhaps for the novelty of the design, but this is a subjective point – the Galaxy S10 he is handicapped by his starving autonomy which will make his use very complex at the end of the day.

The iPhone 11 seems the most balanced of the two, despite the fabulous design of the Galaxy S10 or its greater versatility in photography.