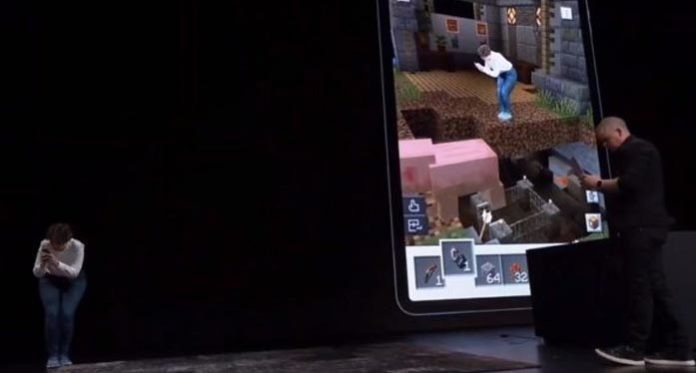 Last week Microsoft introduced Minecraft Earth, a version of the popular augmented reality survival/build game. The Redmond firm has made a first demo on an iPad during the WWDC 2019 using ARKit 3.0.

This morning we introduced ARkit 3.0. The new development framework makes it possible to create more augmented reality apps for iOS. Microsoft seems to be one of the first customers of this solution.

The Redmond Company took advantage of WWDC Apple to show for the first time on stage Minecraft Earth. The application runs on an iPad and iPhone.

Minecraft Earth: a perfect title to showcase the capabilities of ARKit 3.0

This AR game creates levels and integrates the bodies of human players. For that, the developers of Minecraft Earth exploit the tool Motion Capture included in the ARKit 3. It is then necessary to scan the environment, here the stage of conference of Apple, to view creations. If one person films another, his avatar reproduces his actions. In the video, we see that this feature generates a delay of 1 to 2 seconds between the movements and the action of the player.

Of course, you can always control your character in the first person and build gigantic infrastructure. In addition, Minecraft Earth handles space and depth effects. One can also explore the wineries and mines dangerous, but lucrative present in this universe. A good point for experiencing mini-adventures.

A closed beta on iOS this summer

However, Mojang, led by Microsoft, is looking to create a sharing application among virtual builders around the world. In other words, they can collaborate to design crazy constructions or fun variants.

The Redmond firm took advantage of the WWDC conference to specify the first availability of Minecraft Earth. The compatible app from iOS 10 and Android 7 will be available in closed beta on iOS this summer. French players can be among the first to try it. In all likelihood the mode that integrates a human would be compatible only with Apple smartphones.