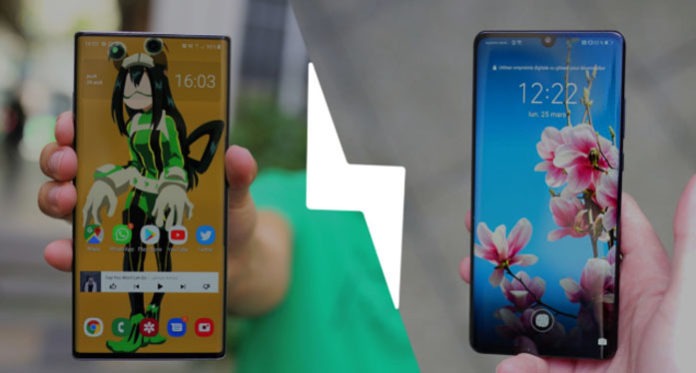 This year is the first time that the most “stylus” range of the Korean giant is hosting two models. The one that will interest us here is the Galaxy Note 10 Plus, a smartphone slightly more boosted than the classic version. If Samsung has already used this process to decline its Galaxy S range, it is not the only manufacturer in the market to want to strengthen the premium aspect of its smartphone yet already very … premium.

The most upscale competitor that comes close today is the Huawei P30 Pro, although it came out a few months ago. Using our detailed comparison, find out which of the two is the best smartphone.

The very demanding segment of ultra-high-end is quite limited, so much so that the references available on the market are usually counted on the fingers of one hand: Apple, sometimes Sony, but it is especially Samsung and Huawei who are now the best enemies.

As a reminder, the Huawei P30 Pro had already faced the Samsung Galaxy S10 Plus in a draw, will the result be the same against the new Samsung Galaxy Note 10 Plus? Although the philosophy of the two smartphones is different, especially because of the pen S Pen for the Korean smartphone, it is now the two largest juggernauts on the market.

A question arises: what is the best smartphone between a Samsung Galaxy Note 10 Plus and a  Huawei P30 Pro? Design, performance, photo, autonomy … Discover our detailed comparison between the two smartphones.

Compared to the S10 and S10 Plus, the Note 10 Plus improves its performance thanks to the integration of the Exynos 9825 SoC engraved in 7 nm, against the classic 9820, here supported by 12 GB of RAM. In addition to significant savings in energy, this allows him to gain a significant gain in power, to finally get closer to the power of a Snapdragon 855.

In everyday life, this configuration will not fail you, both in terms of user experience and the most demanding games from the Play Store. On Fortnite for example, the game runs at 30 fps constant with graphics set to “high” by default. The epic mode in 60 fps has not yet been validated by Epic Games at the time we write these lines, but no doubt that it will soon be compatible given the power it gives off.

Like all recent and high-end smartphones from the Chinese manufacturer, the Huawei P30 Pro is equipped with the flagship HiSilicon: the Kirin 980, accompanied here by 8 GB of RAM. It must be said that it is also a powerful configuration that will also find it difficult to limit its daily as it can handle several complex tasks at once.

That being said, it is clear that it is a bit below what Qualcomm or Exynos is proposing today for the most premium smartphones, but that does not stop it from running the greediest games in the world Optimal conditions. Take the example of Fortnite, it also turned at 30 fps in high mode at the exit of the P30 Pro, but it is now compatible with the epic mode since the validation of Epic Games.

The performance mode of Huawei P30 Pro unfortunately does not fill the power gap between the Kirin 980 and the Exynos 9825. What do you want? It’s the race for power, the biggest, the most … in short. On the other hand, in fact, neither of the two configurations can be really harmed today.

If you’ve read every line of this article, you’ve probably already realized that the Samsung Galaxy Note 10 Plus is the big winner of this versus. Admittedly, we must put the price, but it is clear that it does almost everything better than its competitor very high-end. It’s simple, the Korean phablette is to this day the most premium smartphone that can be found on the market. Point. He excels indeed in all areas to finally disappoint in no category. Well, we can surely regret the removal of the jack, but that’s it.

The Huawei P30 however is not a premium solution to throw in the trash since the release of Note 10. No, quite the contrary. It now enjoys a value for money much more interesting than its launch and its photo part remains the most complete thanks to the 5x zoom that only currently offers. It remains a great option if you want to spend a little less.