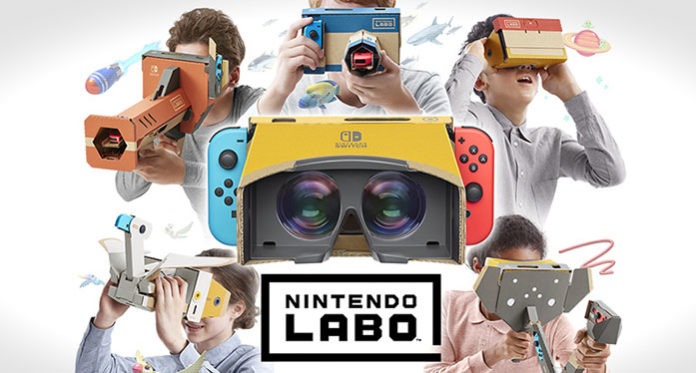 The Nintendo Labo VR Kit is a virtual reality cardboard headset to assemble yourself for the Nintendo Switch console. See the full test and reviews.

In 1995, Nintendo launched the Virtual Boy: one of the first virtual reality headsets. Unfortunately, because of the technical limitations of the time, the proposed experiment was mediocre. This device was confronted with a bitter commercial failure, and the Japanese firm turned completely away from the VR.

Even 20 years later, in 2016, despite the hype around the Oculus Rift and HTC Vive, Nintendo refused to try again. On several occasions, Nintendo executives have stated their disinterest in this technology. In January 2018, the CEO of Nintendo France, Philippe Lavoué, estimated that virtual reality was not ready for the general public. The video game giant seemed definitely disgusted with VR.

Nintendo Labo VR Kit: What is it?

In March 2019, a year after the launch of the Nintendo Labo, and after the Variety, Robot and Vehicle kits, Nintendo unveiled its Lab Kit # 4: the VR Kit . This fourth kit includes six new designs of “Toy-Con” cardboard to assemble yourself: a blaster, a bird, a camera, an elephant, a pedal … and a virtual reality headset in the tradition of Google Cardboard.

This cardboard VR headset, based on the sensors and screen of the Nintendo Switch, is compatible with each of the new accessories of Labo Kit # 4. By combining the headset with one of these accessories, the user can enjoy mini-games in VR. In addition, several major franchises of Nintendo will also be worn in virtual reality…

Nintendo Labo VR Kit: How does it work?

The Labo VR Kit includes all the equipment needed to assemble its own VR headset: 13 sheets of cardboard, a pair of VR lenses, a sheet of reflective stickers, a film of adhesive, pads, eyelets and elastics.

Subsequently, the Nintendo Labo VR Kit relies on the various sensors embedded by the Joy-Cons of the Switch: gyroscopes, infrared cameras, and haptic feedback motor. It is these sensors that make it possible to transform a simple assembly of cardboard into a VR headset. It is also by dint of exploring the possibilities of the Nintendo Lab that the firm had this idea, according to the developer Hironobu Sakaguchi.

Here is a selection of the top 10 experiences contained in the VR plaza of the Nintendo Labo VR Kit.

In this mini-game, you play as a little blue robot who faces his red counterpart. The latter tries to reach the wall behind you to score a goal. If he succeeds, the ball explodes. It’s up to you to react at the right time to score 10 points before him. 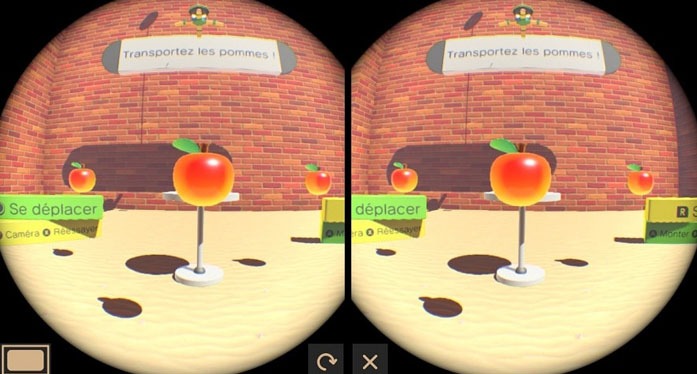 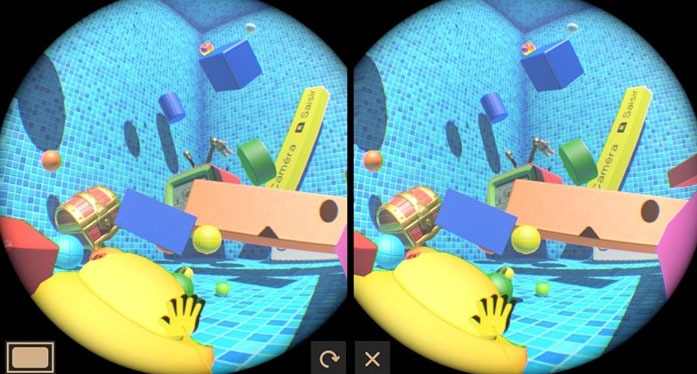 You will tell us that there is nothing to do in this level IF. The objects that are worth every which way, at 7 or 28, it’s still fun. Especially that 3D models are surely the most detailed of the pack. In addition, you can slow down the time on the fly. We admit, we played more than reason to this mini-game seemingly useless. So essential. 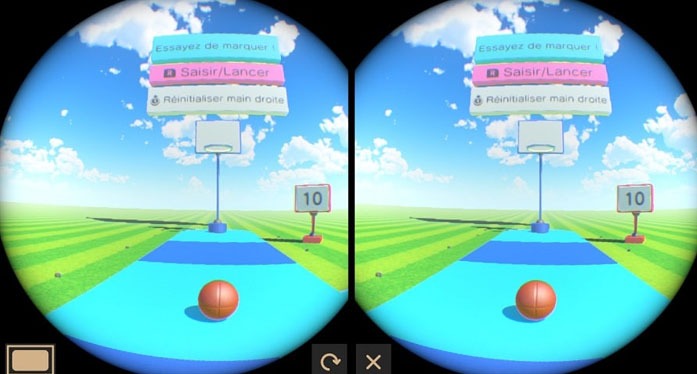 The real first game in the first person. As its name suggests, you have to throw a ball in a basketball hoop and score 10 points. Be careful if the ball comes out of the racket you will have to start again. An interesting challenge. It is not necessarily easy to replace the ball at the same place. 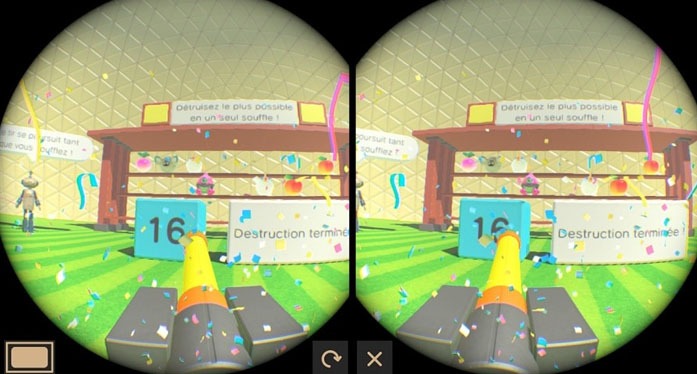 The windmill offers a new form of gameplay. By blowing, you send balls that break objects. In the mess-all, a shelf filled with bric-a-brac faces you. You have to blow all the items in one breath. At the end, your score appears. A funny and addictive mini game.

Instead of a mini-game of a few minutes, Nintendo gave a big place to his camera in the Nintendo Labo VR Kit. In the first experiment, you play as a diver who, like a game of hidden objects, must capture the fish and the secrets of this underwater environment. You move on two axes: the top and the bottom. Thus, you access three distinct environments: the surface, the depths and the depths. To you the joys of looking for a bream, a pacific tuna, a shark, but also a siren, a giant robot or even a treasure. You have thirty items to flush out.

Clearly, the accessory provides two great mini games. One can draw in three dimensions as in Tilt Brush. If this tool is less complete than the reference of the kind, the numerous possibilities come to answer to the creativity of the children.

The second mini-game involves designing circuits for balls. We must find the right elements to bring these balls to the right place. This puzzle game particularly seduced us.

The barrel gives experiences very close to what could offer an arcade or Time Crisis on PlayStation. This obviously reminds the past of Nintendo and his famous Duck Hunt. Here you are placed on a rail and you must shoot enemies and obstacles present in your path.

The 33 videos of discovery mode 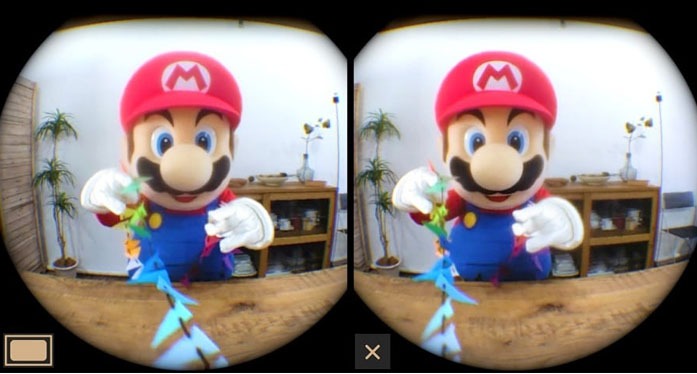 Okay, these are 180-degree videos, but each of them could generate dozens of memes. Nintendo’s employees stage themselves and offer particularly zany moments. Be aware, the first presents a man dressed as Mario who pulls scarves from a place at the level of your mouth.

Bonus: Your game?! The crazy experiments of Toy-Con Garage

With the Toy-Con Garage VR, you can create your own VR games. Yes, you read that well, Nintendo provides a visual development interface to make their own creations, then test them. With a 3D object library, you can create sets and install mechanisms. You can determine actions according to the actions of the player. You test your game directly by pressing the play icon. It takes a little time to understand the manipulations. Fortunately, discovery mode introduces you to this powerful tool that increases the life of the pack by a factor of ten.

Why Zelda Breath of The Wild is not in this selection 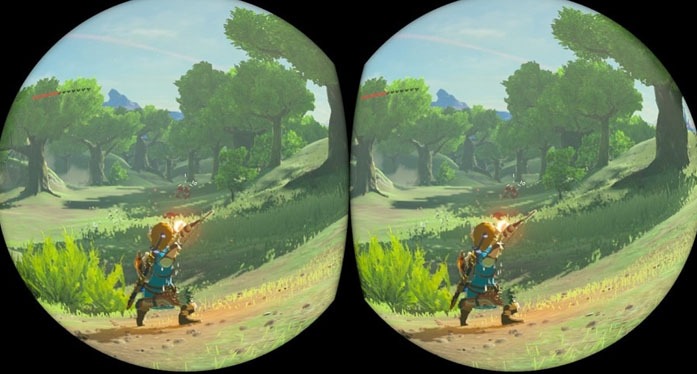 We were looking forward to the free Zelda update on Switch. Nintendo announced the opportunity to play the full title with the Nintendo Labo VR Kit. We could try the feature. As much as you say immediately, we are disappointed. The developers have not adapted the camera. This one stays behind the character. Above all, you tire your eyes before the wrists. Indeed, the 720p screen is clearly not suitable for the experiment. Especially since Zelda does not enjoy a perfect technique. Some non-VR zones cause serious slowdowns, such as Korogu Forest. In RV, the visit of this enchanting place attacks the senses. The size of the crystals on the screen, the pronounced aliasing, the FPS at half do not pay tribute to this exceptional game.

Nintendo does not recommend playing the full VR adventure. The headset seemed to fit the vision of a panorama, a sort of reward after climbing to the top of a tower. However, the display distance and the technical problems evoked ruin this discovery. Clearly, we prefer that Nintendo announce a new compilation of VR mini-games rather than a new attempt to adapt an existing game. Regarding Mario, you have the same problems. The shorter experience further limits the damage, but we do not recommend buying this title for its VR argument. 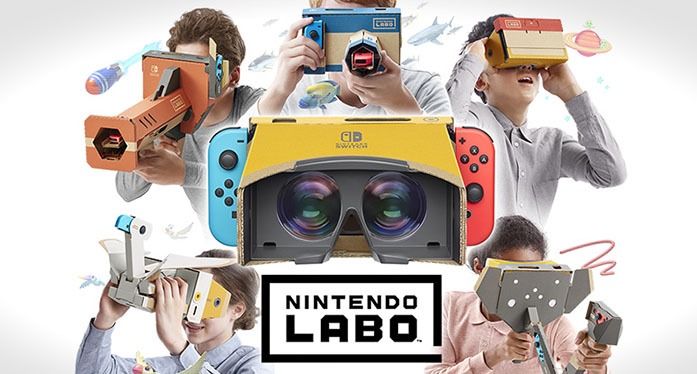