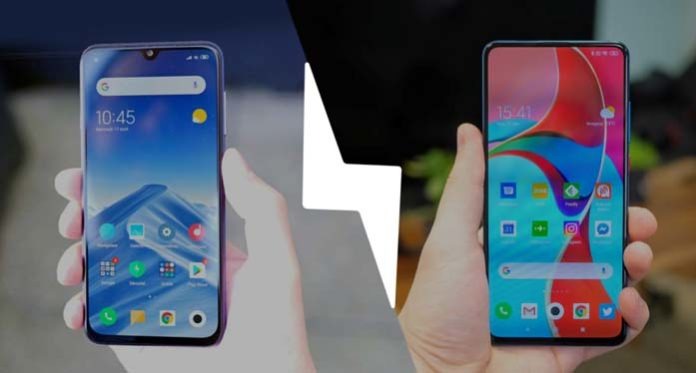 Shortly after marketing the Mi 9 SE, Xiaomi returns with a new smartphone for the world mid-range market: the Xiaomi Mi 9T. Unlike the light version of the Mi 9, this new model is not a mere derivative of the current flagship, but rather a model in its own right, also called Redmi K20 in Asia.

In many ways, the two Chinese smartphones (SE and T) are different. However, they are both positioned on the same price band, about twenty dollars. Our detailed comparisons here to help you decide between them and, at the same time, find out which of them will win the prize for the best smartphone.

We will make things clear from the outset: the Redmi K20 and Xiaomi Mi 9T are exactly the same smartphone. The only difference comes from the name used according to the geographical location, where the first obviously concerns the Asian territory, while the second has been adapted for the French market – a maneuver whose sole purpose is to make it more easily recognizable for the General public.

Although the effort is laudable, there is nevertheless more confusion in the catalog of the Chinese manufacturer, especially as this new iteration is offered at almost the same price as the Xiaomi Mi 9 SE out some time before.

A question arises: what is the best smartphone between a Xiaomi Mi 9T and a  Xiaomi Mi 9 SE? Design, performance, photo, autonomy … Discover our detailed comparison between the two smartphones!

If the “K” of Redmi K20 means “Killer” for Asia, the “T” of Xiaomi Mi 9T can very well designate its exact translation in France: “Killer”. Indeed, with its Snapdragon 730 supported by 6 GB of RAM, the new Chinese smartphone is far above the performance of the competition on the same segment, but also its opponent for this versus.

To put it simply, its power lies between the Huawei P20 Pro’s Kirin 970 chip and the Samsung Galaxy Note 9’s Exynos 9810, flagships dating from just last year. An excellent performance for a mid-range smartphone sold at this price, so.

On the other hand, the Xiaomi Mi 9 SE is not as impressive as its opponent, even if its performances remain honorable compared to the competition. Its Snapdragon 712 and 6 GB of RAM allow you to enjoy a perfectly smooth experience and run a few 3D games from the Play Store in acceptable conditions, and it’s already very good.

By being almost at the level of performance of the flagships of the previous year, the Xiaomi Mi 9T is a great demonstration of power for a mid-range smartphone. A little behind, the Xiaomi Mi 9 SE does not disappoint compared to the competition, but we can regret the extra $20 for a smartphone slightly less boosted.

If you have read every line of this versus, the winner seems obvious, right? The Xiaomi Mi 9T arrives like a bomb on the mid-range market, even shading other members of his family.

Its original design, its AMOLED display and border-less, its performance worthy of high-end smartphones of 2018 or its monstrous autonomy, these are all elements that deserve the investment of $349.

The only reason that would push up the budget for the Xiaomi Mi 9 SE would be to get better photo quality … Uh, actually no. Buy a Google Pixel 3a  at this time.